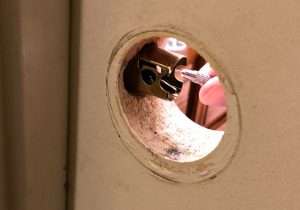 MELVINDALE — A police officer freed a man locked inside his apartment the night of June 22 after the door became stuck and the resident accidentally broke off the doorknob, which fell to the floor outside of the apartment, in the 17700 block of Palmer Street.

The man said he had been unable to reach the building manager, so he summoned a police officer instead.

At the tenant’s request, the responding officer kicked the door near the knob interface, which successfully dislodged the door. The man acknowledged that he can secure the door with the deadbolt until he is able to reach the manager to fix the door.