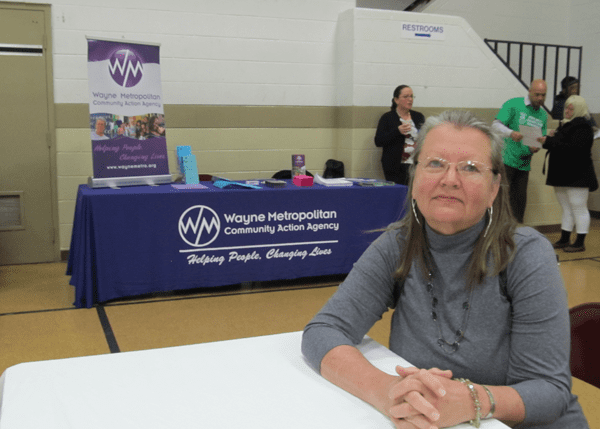 Jane Scarlett, director of homeless programs at Wayne Metropolitan Community Action Agency and the facilitator for the Out-Wayne County Homeless Services Coalition, waits to assist attendees at Project Homeless Connect, held Nov. 13 at Our Lady of the Angels Catholic Church in Taylor.

By SUE SUCHYTA
Times-Herald Newspapers
TAYLOR – When year-end holidays stir thankfulness and spur generosity, collections of food and clothing for the poor may overshadow the very real and urgent need for affordable housing.

At Project Homeless Connect, an annual event in Out-Wayne County held Nov. 13 at Our Lady of the Angels Catholic Church, 6442 Pelham in Taylor, Jane Scarlett spoke of the urgency of the cause.

As director of homeless programs at Wayne Metropolitan Community Action Agency and the facilitator for the Out-Wayne County Homeless Services Coalition, Scarlett said affordable housing is often an afterthought when addressing the needs of the working poor and homeless.

Scarlett estimated 250 attended PHC, which she said is a drop in the bucket compared to local need.

She said the annual event exposes people to multiple service providers in an economical way, letting them make connections they may need in the future. Participants also received free health screenings and bag lunches at the event in addition to agency referrals.

“It is a coalition of organizations that work together to get the job done,” Scarlett said. “I think that is really, to me, where the strength lies. We are a well-oiled machine in Out-Wayne County. Everyone around the table knows who does what best, and who does what when, and where, why and how. Nobody operates on protecting turf.”

For more information, go to www.outwaynehomeless.org.

She said the OWCHSC member organizations work together year-round to design and implement programs to serve those who are at risk of being and those who already are homeless as they strive to provide comprehensive, seamless services to resolve people’s housing and homelessness issues.

Scarlett said in 1995, the U.S. Department of Housing and Urban Development implemented the Continuum of Care model for homeless service delivery systems at the local level, which allows community providers to work together as COC bodies to determine funding allocation. Initially WMCAA joined with several other Out-Wayne County organizations to start what is now the OWCHSC, which has grown locally to include more than 20 other member organizations.

Independent COC bodies serve the entire state, with Detroit, Hamtramck and Highland Park covered by a coalition separate from the Out-Wayne County COC.

While she encourages people to continue to hold food and clothing drives for the less fortunate year round, Scarlett urges them to contact their members of Congress, urging them to increase funding for the housing choice voucher program.

She said there is plenty of housing within the affordability range, but a limited supply of vouchers, with a waiting list. When funding is cut, vouchers, and subsequently access to affordable housing, becomes more scarce.

She estimates there are more than 20,000 people in Out-Wayne County on the waiting list for vouchers. She said relatively few are in shelters, and most are constantly getting eviction notices because they cannot pay their rent.

“I would like to see legislators here looking at the number of people that are coming in the building,” Scarlett said. “It is difficult for an individual to help provide affordable housing –the path to affordable housing is through the legislative process. That is where people’s voices are heard.”

When children become homeless, Mia Cupp, director of development and communications for WMCAA, helps them stay at their school of origin. She uses the McKinney-Vento Homeless Education Assistance Act of 1987, a federal law, to help homeless children stay in their school of origin and receive the services for which they are eligible, helping ensure educational stability.

“It could be school supplies, it could be field trip money,” Cupp said. “It could be things that that family cannot afford.”

Her agency also provides an afterschool and summer program at a family shelter in Westland, in the former Eloise complex that helps provide a buffer after school for children living in the shelter dormitory.

Cupp said there is a lot that people can do to help the homeless in shelters, from donating items to money, which in turn can help change someone’s life.

“Don’t throw things away that can be used again,” Cupp said. “If you have a family (charitable) fund, make sure it is going to people in your community. When you think about where (your donation) is going to do the most for people you are driving past every day, consider keeping that money right here in Wayne County.”

Another shelter option that relies strongly on local support, ChristNet Center in Taylor, uses a partnership of churches to provide emergency shelter for homeless individuals and families, as well as daytime access to health services, job skill development and other stabilization services.

“People who are homeless are people,” Petri said. “I wish that people would just open their eyes to that. They are a person, too, and (should be) treated with respect, (as) you would want to be treated.

“People think homeless people are addicted to drugs or alcohol, and that is not always the case. People become homeless for many different reasons.”

As the holidays approach, Scarlett said she would encourage people to be thankful for being able to afford housing.

“I am not suggesting that it may not be a struggle for them,” Scarlett said, “but the fact that they can maintain housing, for that I ask them to give thanks.”