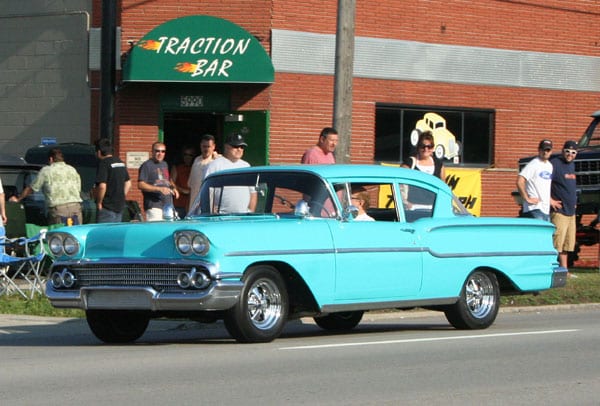 By BOB OLIVER and JIM MITCHELL
Times-Herald Newspapers
TAYLOR — Car enthusiasts and local police are getting ready for the 10th annual Telegraph Cruise while special events in Taylor for cruisers and spectators are down from last year.

The cruise begins at Eureka Road in Taylor and then passes through Dearborn Heights and Dearborn before finishing at Puritan Road in Redford Township.

The classic cars draw crowds from each of the communities they pass through and visitors gather in parking lots and driveways and throw parties throughout the day while watching and interacting with cruisers.

In Taylor, absent this year from the cruise will be the Party Zone from Loor Productions, which had partnered with WDRQ-FM last year to host vendors, a beer tent, live music and more at the intersection of Champaign Road.

A statement on the Loor Productions “telegraphcruise” website reported that the Zone was “a one-time event” that “will not be held again unless some major changes happen along the way.”

Cruisers can still find the spirit at Telegraph Road staples including Biker Bob’s Motown Harley-Davidson, 14100 Telegraph, which in recent years has offered displays and fundraisers tied to the event. On the day of the cruise a Bagger Bike Show and Pin-Up Girl Contest will both be held at 1 p.m. at the dealership.

“This is always one of our main events of the summer,” Rey said. “We feed the club and talk cars and enjoy the view of all of the cars cruising.”

Rey said the MOCSM sets up shop in the parking lot of J & J Collision, 6528 N. Telegraph between Warren and Ford Road in Heights, and usually has between 60 and 100 of its 725 members come out for the cruise.

He added that the event is one that a lot of people in southeast Michigan look forward to every year, whether they own a classic car or just like to admire them.

“A lot of people grew up racing and cruising on Telegraph when they were younger, including myself,” Rey said. “It brings back a ton of good memories and hanging out with fellow enthusiasts allows you to create new memories.”

Heights Police Chief Lee Gavin said traffic from the cruise has gone down over the last couple of years, but that officers will still be patrolling the area to keep people safe and watch the drivers.

“We will have a few more officers in the area, especially the south end of the city to maintain a presence,” Gavin said. “Normally, we don’t have too many problems with the cruisers but we just want to keep everybody safe.”

Gavin also said the people have to use common sense and be careful with pedestrians enjoying the cruise.

“We have a lot of people along the roads and in parking lots, so drivers have to really be aware of their surroundings,” Gavin said.

The city also has a list of recommendations for both cruisers and spectators to keep the event as safe as possible.

For cruisers, it is recommended that they adhere to posted traffic laws and to refrain from doing burnouts or engaging in street races. They are also warned to watch for pedestrians and spectators on roads and in parking lots.

For spectators, it is recommended that they stay a safe distance from the roadway, cross streets only at intersections, park in appropriate locations, take appropriate precautions for the weather and to refrain from alcohol consumption in public.

It also is recommended that spectators drink plenty of non-alcoholic beverages while outside in the heat.