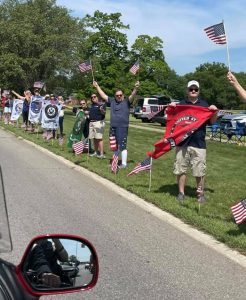 From Trenton, through Dearborn Heights to Taylor, the Wounded America Motorcycle Ride continued its annual tradition of riding through communities with the goal of raising money for local veterans.

This year, the ride raised $30,000 which matched the total raised last year during the scaled down version of the sixth annual event. Funds went to the non-profits Downriver for Veterans — which serves veterans in multiple ways including assisting with rent, utilities and car repairs — and Foundation 14 — which puts veterans on motorcycles to combat post-traumatic stress disorder using community, networking and family.

The escorted ride started at Fritz Enterprises in Trenton, continued to Elizabeth Park, then Warren Valley Golf Course in Dearborn Heights before ending at Motown Harley-Davidson in Taylor.

Almost 200 motorcycle riders and another 50 volunteers participated in the ride followed by the ceremony held at Motown Harley-Davidson. Police and fire departments from the cities involved helped escort throughout the route.

During the ceremony, a check was presented to the two non-profits, and veterans and first responders were honored. Victor Stoddard, a U.S. Navy Vietnam veteran and Pat Calendar, a U.S. Army Afghanistan veteran each spoke on the behalf of the two non-profits from they received assistance.

Free food and beverages from 10 area restaurants was provided, including Culver’s in Taylor.

“Culver’s was honored to be able to support veterans by participating in this year’s Wounded America Ride,” said Jeff Holden, who wore two hats related to the ride as Marketing and Community Relations director for the Allen Park Culver’s as well as Taylor Rotary Club Public Image chairman.

The restaurant, which is owned and operated by Gerry Olinik, offers a special parking space for veterans and a discount to all veterans. For the ride, the Taylor restaurant provided more than 150 scoops of its frozen custard to riders and volunteers.

“Giving back to veterans and the community they served was an honor,” Olinik said. “We want to be known for being a community restaurant that cares.”

The Taylor Rotary Club donated $1,000 in memory of Aaron Janiten who received an honorable discharge from the U.S. Army after serving from from 2003 to 2008.

“He will be deeply missed by all those who knew and loved him,” Holden said.

Dearborn Heights Rotary Club Programs and Public Image Chair Lynne Killion said the biggest payback is the camaraderie and support which is bigger than the money.

“This cause is personal for me, my grandfather served in World War I, my father in World War II and my son in the Iraq War,” she said. “The ride provides emotional support, financial support and more than anything. The money is one thing, but can only solve a problem partially.”