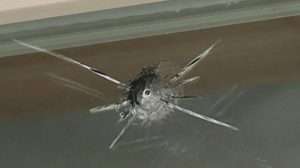 TRENTON — A pellet gun was used March 26 to shatter the front windows of a recently purchased house on Charles Street, the new owner reported.

The victim said she had just closed on the house the day before.

The front living room window and siding, two of the bedroom windows and a window close to the front door were damaged by pellets.

She said she had an inspection pending, and she wanted the police report to indicate that none of the damage was present before she closed on the house.