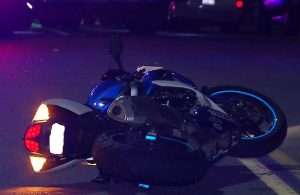 WYANDOTTE — A motorcyclist who popped a wheelie on northbound Fort Street at 1:41 a.m. May 30 in front of a police officer lost control and fell, with the bike, to the pavement.

When the police officer activated their vehicle emergency lights, the driver jumped back on the motorcycle and fled east on Ford Avenue, then north on Biddle Avenue, in an attempt to elude law enforcement.

The motorcyclist went west on Goddard Road, where they once again lost control of the motorcycle, dumped it on the pavement, and began to crossing the railroad tracks on foot.

The driver, who showed obvious signs of intoxication, had a blood-alcohol content of twice the 0.08 limit for legally drunk in Michigan. They were arrested for fleeing and eluding, and for operating while intoxicated.