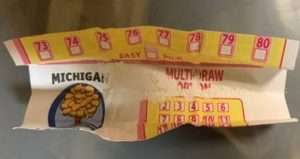 WYANDOTTE — A 29-year-old Lincoln Park man, who was high on methamphetamine and morphine the afternoon of July 11, was running down an alley near the 2700 block of 21st Street when he was questioned by police officers prior to being taken to Henry Ford Wyandotte Hospital for treatment.

The man also had two paper packets with cocaine in his pocket, and was charged with possession.