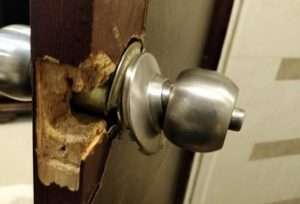 TAYLOR — A front door deadbolt was reported damaged the night of June 30 at a house in the 10800 block of Pine Street, which the resident, a 29-year-old man, believed may be the work of a former friend who is stalking him at work.

The victim said the suspect, a 28-year-old man, won’t leave him alone. He was able to repair the deadbolt, and determined that nothing was missing from the residence.