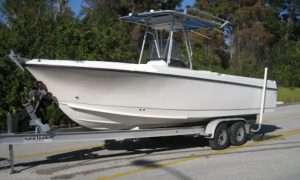 TRENTON — A house was broken into and vandalized, as well as a boat and pickup stored on the property, a homeowner reported Aug. 5 to police officers.

The victim said that when he purchased the house, he parked the boat and pickup on the property while residing elsewhere.

He said when he returned to the house later, he discovered that the house had been broken into, and all the faucets were left running. In addition, a hose had been turned on and placed in the pool, which was overflowing onto the back yard.

Fluid was leaking from the truck, a black 1997 Ford F-250, and it would not operate properly. He then discovered that the boat, a 1997 Shamrock 26-foot fiberglass craft, was also damaged, and items stored in it, valued at more than $17,000, were stolen.

There were no suspects. The victim said he needed to file a police report for insurance purposes.