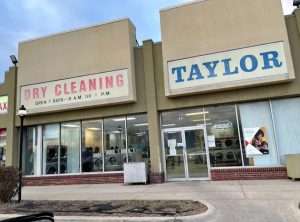 The building was searched and was found to be unoccupied. A half-door leading to behind the counter was discovered to be damaged.

Surveillance camera footage shows a dark blue or black Dodge Journey parking close to the building entrance, after which a masked man in a dark hoodie exited from the passenger side of the vehicle and smashed open the business door. He then entered the business, broke the door leading to behind the counter and opened the register but did not not take anything from the cash drawer.

After the man searched the store further, he exited the business and got back into the Dodge Journey, which then left the scene.

The business owner confirmed that nothing was stolen from the business.