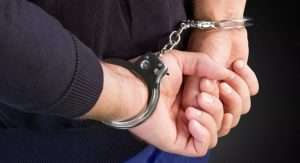 WYANDOTTE — A 26-year-old Allen Park man was arrested the morning of Nov. 6 after threatening to break into his former girlfriend’s apartment in the 2700 block of 10th Street.

According to the complainant, the man showed up uninvited and demanded to be let inside, and when entrance was denied, he became angry and threatened to kick in the door.

When it was learned that the man was wanted on a fugitive arrest warrant, he resisted being detained, pulling away from the police officers and attempting to break free. After a brief struggle, he was taken into custody.