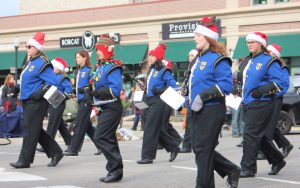 Police officers, firefighters and rescue personnel led the way, with a mascot costumed fire pup riding in a bucket lift attached to a fire engine while greeting the crowd.

Local elected officials waved to the crowd, followed by veterans.

Members of the Rogalin Dance Troupe of Wyandotte, sponsored by the Polish Roman Catholic Union of America, danced their way along Biddle Avenue in their colorful Krakowiak costumes, followed by middle school musicians and the Y&* vintage base ball team.

Wyandotte Cub Scout pack 177 and BSA troop 1770 carried flags and seasonal decorations, and Riverview Cub Scout Pack 1659 rode on a Christmas-themed float, accompanied by the rumbling engines of the motorcycles of the American Legion Riders.

The Lincoln Park Dance Company tapped its way up Biddle Avenue, followed by the cheerful costumed snowmen of the home-schooled Wayfarers group.

Nankin Hobby of Southgate was a crowd-pleaser with a contingent of radio-controlled cars, which maneuvered and jumped a towed ramp as the participants wheeled along the parade route.

A nativity scene with students from John Paul II Classical Catholic School of Lincoln Park was a favorite with the crowd, followed by a contingent from the American Youth Soccer Organization, and the Taylor West Middle School marching band.

Decorated Jeeps, one bearing Olaf, the snowman from “Frozen,” paraded by, followed by the enthusiastic gymnasts from Downriver Gymnastics of Southgate performing flips along the route.

The Yankee Air Museum Willow Run Rosie drill team was warmly received, as was an original Rosie, Jean Zaranko, who worked in the Willow Run bomber plant during World War II as a B-24 riveter.

The Wyandotte Jaycees also hosted costumed characters, including Cindy Lou Who and a Grinch, who was more than happy to mug for the cameras.

The Wyandotte Roosevelt High School flag team and the Marching Chiefs heralded the arrival of Santa and Mrs. Claus with flags twirling and festive music.

Santa, honored with a police escort, brought the parade to its long-awaited conclusion in a sleigh on a house-top float, with a team of reindeer guiding his path, as he waved to all the eager parade attendees.